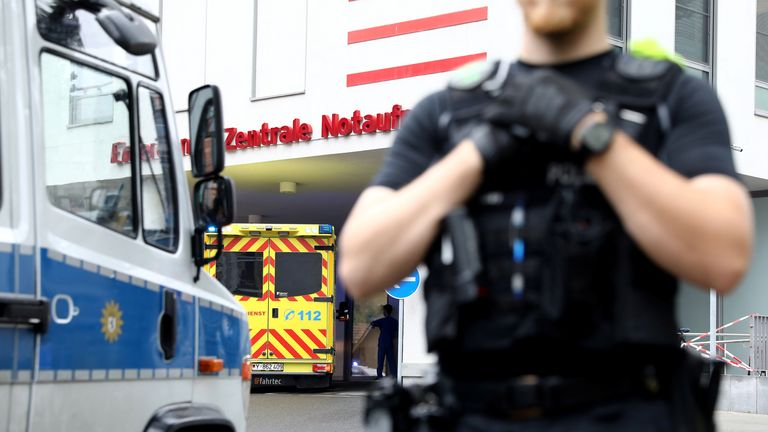 Berlin’s Charite Hospital noted that the Kremlin critic was suffering from “intoxication by a substance from the group of cholinesterase inhibitors.”

It added that Navalny, who was transferred to the German capital from the Siberian city of Omsk on Saturday morning, is in an artificial coma in an intensive care unit. “His state of health is serious, but there is currently no acute danger to his life,” the hospital said in a statement Monday.

The specific substance used to poison Navalny has not yet been identified, according to the hospital.

Navalny’s spokesperson Kira Yarmysh said last week that he fell sick from suspected poisoning on a flight to Moscow from the Siberian city of Tomsk.

Josep Borrell, the EU’s top diplomat, called for an investigation in a statement published on Monday evening.

“The European Union strongly condemns what seems to be an attempt on Mr Navalny’s life. It is imperative that the Russian authorities initiate an independent and transparent investigation on the poisoning of Mr Navalny without delay,” read the statement by the bloc’s High Representative for Foreign Affairs.

It continued: “The Russian people, as well as the international community, are demanding the facts behind Mr Navalny’s poisoning. Those responsible must be held to account.”

Earlier on Monday, the German government said it was “fairly likely” that Navalny was poisoned and would therefore need special protection.

“We are dealing with a patient who, it is fairly likely, was poisoned,” Chancellor Angela Merkel’s spokesman, Steffen Seibert, told journalists during a Monday press briefing. “Because there is a certain probability of a poison attack, protection is necessary,” Seibert said.

”The suspicion is not that Mr. Navalny poisoned himself but that someone poisoned Mr. Navalny. And there are unfortunately one or two examples of such poisonings in recent Russian history,” added Seibert.

Merkel and Germany’s Federal Foreign Minister Heiko Maas said in a joint statement: ”According to the medical team at the Charite [hospital], the clinical findings point to poisoning of Alexey Navalny. Given the prominent role of Mr. Navalny in the political opposition in Russia, local authorities are now urgently called upon to clear up this crime to the last detail — and to do so in full transparency.

“We hope that Mr. Navalny can recover fully. Our good wishes also extend to his family, which is undergoing a severe test.”

Jaka Bizilj, chairman for Cinema for Peace Foundation, which organized Navalny’s medical evacuation to Germany, told on Saturday that Navalny was in a “stable condition.”

The Siberian hospital that had previously been treating Navalny on Friday rejected claims he had been poisoned — even as his wife said the doctors there could not be trusted.

On Friday, Anatoly Kalinichenko, the deputy chief physician at the Russian hospital where Navalny was being treated told a news conference that no poisons were found in Navalny’s blood or urine. “We don’t believe that the patient suffered poisoning,” Kalinichenko told local journalists.

“Poisons or traces of their presence in the body have not been identified. Probably, the diagnosis of ‘poisoning’ remains somewhere in the back of our minds. But we do not believe that the patient suffered poisoning,” he added.

What are cholinesterase inhibitors?

“Organophosphate insecticides poisonings are common worldwide, as farmers sometimes mishandle them. But some organophosphates are far more poisonous than insecticides and have been used for military purposes e.g. sarin, VX and Novichok,” he said.

The inhibitor acts on the nervous system in place of the critical acetylcholinesterase (AChE) enzyme, which transmits signals within biological systems. “The inhibitor attaches itself in the same place where the enzyme should be and the enzyme becomes irreversibly blocked,” said Sella.

He said poisoning by cholinesterase inhibitors is easy to diagnose.

“It’s one of the first thing they should have checked in Omsk. There are a number of symptoms that accompany this poisoning including various types of muscle paralysis, contraction of the pupil in the eye, blood tests, and so on.”

The Charite Hospital in Berlin said in its Monday statement that Navalny is being treated with the antidote atropine.

Sella added that the atropine treatment is used to calm the nervous system and act against overstimulation, and agents such as Pralidoxime are used to reverse the attachment of the inhibitor and restore the activity of the AChE enzyme.

However, fast treatment is needed, he said.

“If you don’t act quickly you could have long-term damage associated with the nerve system,” Sella added. “Navalny was treated and kept alive, yes, but whether or not if he’ll have further damage remains to be seen.”