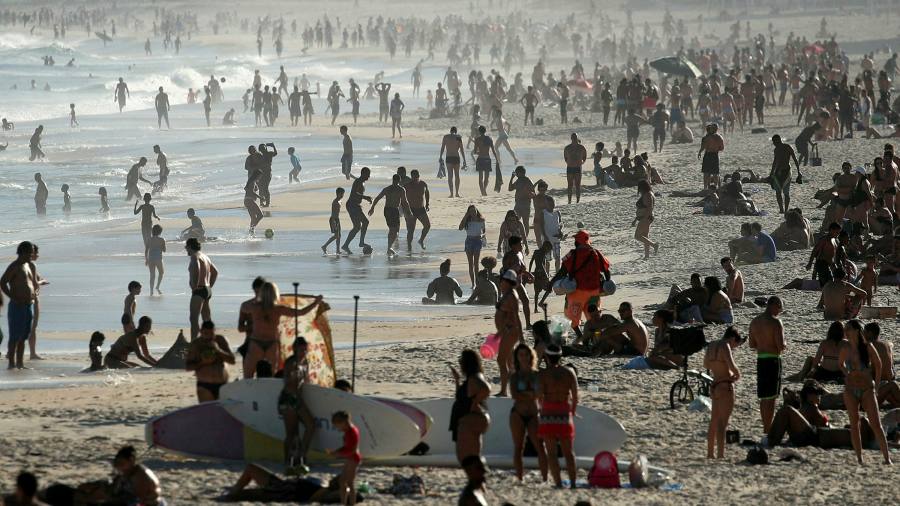 “My crew and I are excited to be back to work,” he told CNN about his place called Cabanna, which serves snacks, sandwiches and cocktails. “It will be different, with all the precautionary measures we have to take, distances of tables, number of people sitting together, but it feels good to be working again.”

Assy said he barely avoided bankruptcy, laying off four of his 11 employees and freezing or reducing the salaries of the remaining seven when Rio de Janeiro ordered all but essential businesses closed in March, in a bid to halt the spread of Covid-19.

“Another month like this, and I would have to close completely,” he said. “Today I am more afraid of staying at home and not working than of the coronavirus.”

Like many cities in Brazil, under pressure from growing unemployment and a tanking economy, Rio de Janeiro is relaxing restrictions — despite warnings from experts that the city has so far failed to bring Covid-19 under control.

Starting Thursday, restaurants, bars and gyms were allowed to reopen, following new health guidelines that required the wearing of masks and social distancing. On the first day, there were few customers on the waterfront promenade, although it was unclear if it was due to the weather or a still very-present fear of the coronavirus, which experts say may not peak in Brazil until mid-August.

At the end of May, researchers at the Federal University of Rio de Janeiro (UFRJ) calculated the pandemic in Rio would peak the following month, and recommended maintaining social isolation measures.

But on June 2, Rio Mayor Marcelo Crivella nevertheless announced a plan to gradually relax restrictions, starting with the reopening of car dealerships and home decorations stores. Then came commerce, shopping malls and some public spaces.

Overall, Brazil has the second-highest number of coronavirus cases in the world, second only to the US. As of Thursday, there were more than 60,000 deaths and 1.4 million confirmed cases of the virus.

Another city has regrets

But plans to reopen remain unchanged. Experts warn Rio could follow in the footsteps of other Brazilian cities that moved too quickly to reopen and ended up having to close down again.

One of the first Brazilian state capitals to implement a quarantine, Belo Horizonte in Minas Gerais, started to reopen its economy at the end of May. But this week it ordered non-essential activities to close again, due to the spike in deaths and hospitalizations.

“This indicates that the decision to expand the reopening was based on economic and non-scientific criteria,” Medronho told CNN.

Covid-19 has hit the Brazilian economy hard even as President Jair Bolsonaro has repeatedly downplayed the impact of the virus by insisting that hunger and unemployment could kill more people than the pandemic. While a wide majority of Brazilians initially supported closing non-essential businesses, Bolsonaro’s message has increasingly resonated.
Some 7.8 million Brazilians lost work between March and May, according to figures released this week by the Brazilian statistics agency IBGE. The agency said that for the first time since it started tracking the data, less than half the working-age population was actually working. The exact figure was 49.5%.

Economists are forecasting a historic recession due to Covid-19. The Brazilian Central Bank estimated a 6.4% drop in GDP for this year, while the International Monetary Fund is more pessimistic and sees the economy shrinking 9.1% in 2020.

Rio’s Crivella said his decisions were made after discussions with his scientific committee, which determined that gyms, bars, and restaurants could reopen because the number of deaths had slowed and the percentage of ICU beds occupied had also declined.

In early June, 90% of ICU beds in Rio were occupied. This week, the rate had fallen to 69%. Experts nonetheless say it should not be the only statistic used to make decisions.

“Governors and mayors opened field hospitals and bought ventilators, and the numbers improved,” said Domingos Alves, a computer modeling expert from the Covid-19 Brasil group, which brings together scientists from several Brazilian universities.

“But this has a limit: doctors are not as available as beds, and there is no way to increase this capacity indefinitely. Relying only on ICU bed occupation as a foundation for reopening is a trick that’s being used to calm the population.”

Alves said plans next week to open soccer matches in the city to the public will only aggravate the already delicate situation.

The city of Belo Horizonte also based its decision to reopen at the end of May on ICU bed occupation, a decision Mayor Alexandre Kalil now regrets.

“What we are doing as a country is to buy more beds. It was a mistake to think that this would solve it. Now we had to close again in Belo Horizonte because the cases skyrocketed. I see this drama as a war, and in a war, you change your strategy all the time,” Kalil said in an interview.

By the end of May, the number of hospital beds in Belo Horizonte had quadrupled since the beginning of the pandemic and Kalil allowed retail stores and beauty salons to open.

Unlike Rio de Janeiro, Belo Horizonte did not permit shopping malls, churches, and parks to reopen, but even so, within a month cases jumped from 1,852 to 4,942, and the death toll went from 49 to 106. Earlier this week, 92% of intensive care beds were occupied.

Kalil re-imposed social isolation measures on June 26. He said they will be maintained for at least another two weeks.

“You can’t say that everything is OK when the media reports the country’s death toll has surpassed 60,000. In Belo Horizonte we are not flat-earthers. Closing or opening will depend on science and numbers,” he said.

Scientists at the Covid-19 Brasil group predict that cities relaxing social distancing measures could see a 150% increase in the number of registered cases of Covid-19 in the next two weeks.

“Governors and mayors are sending the population to the slaughterhouse with the prerogative of an economic recovery,” said Domingos Alves.