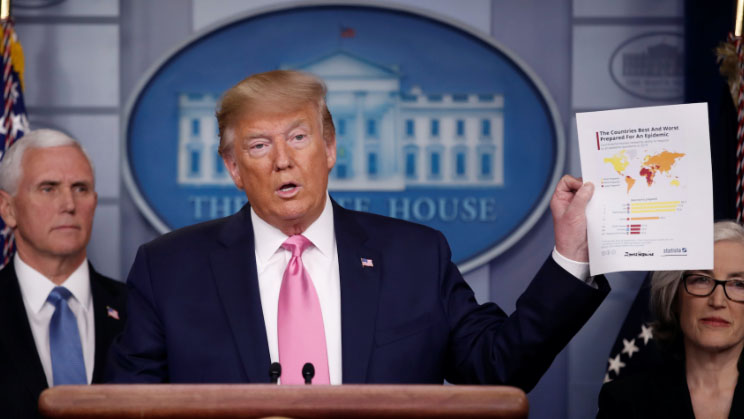 President Donald Trump said on Thursday that the new coronavirus would eventually be contained and “disappear” in the US, CNN reported.

“We have done an incredible job. We’re going to continue,” Trump said during a Black History Month reception at the White House. “It’s going to disappear. One day it’s like a miracle, it will disappear. And from our shores, you know, it could get worse before it gets better. Could maybe go away. We’ll see what happens. Nobody really knows.”

His statements add to the mixed messages from his administration about the novel virus, recently named COVID-19.

On Tuesday the CDC issued a warning to Americans that it is only a matter of time before the virus spreads in the US.

“It’s not so much of a question of if this will happen in this country anymore, but a question of when this will happen,” Dr. Nancy Messonnier, the director of the National Center for Immunization and Respiratory Diseases at the Centers for Disease Control and Prevention, said during a press call.

The same day Trump’s top economic adviser Larry Kudlow told CNBC. “We have contained this. I won’t say airtight, but pretty close to airtight. We have done a good job in the United States.”

During a press conference on Wednesday Trump said his administration was looking at the worst case scenario, but also that the general public should treat this outbreak like the flu, wash their hands frequently, and avoid touching handrails to protect themselves. No new travel restrictions were announced or any mandatory measures set in place to curb the spread.

Trump also announced that Vice President Mike Pence would be in charge of the coronavirus task force. Pence has been criticized for his handling of an HIV outbreak in rural Indiana when he was governor in 2014.

Shortly after the press conference on Wednesday, the first possible case of “community spread” in the United States was reported in Northern California. Community spread means that it is unknown how the patient contracted the novel coronavirus. The individual did not recently travel to China or interact with a known infected person.

A internal memo from University of California, Davis Medical Center, where the patient is being treated, revealed that the person was transferred from another to UC Davis Medical Center after her condition worsened. Initially, requests to test the patient for the novel virus were denied at because they did not meet the CDC’s criteria for testing. After several days, the patient was tested for the COVID-19 virus and it came back positive.

In another incident of mixed messages, the Trump administration said a vaccine for the virus, which has yet to be made would be unaffordable to most US residents. Afterwards Health and Human Services Secretary Alex Azar reversed course and said the organization would ensure the vaccine was affordable for most Americans.

It is unclear what will happen with the spread of the novel coronavirus. Some health experts told Insiders that the virus can play out in several ways — including that it could become endemic, like the cold and flu. That means it would be a recurring in the human population and fluctuate depending on the season.

Dr. Thomas Frieden, the former director of the US Centers for Disease Control and Prevention told CNN that the virus could become a pandemic, and it’s very likely to spread in the US.