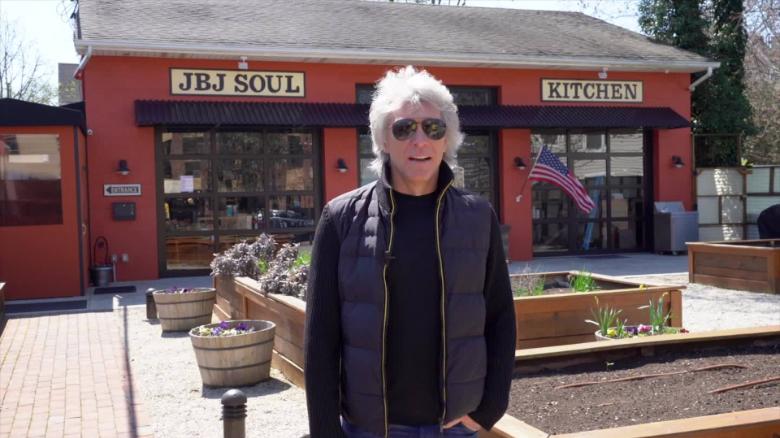 At his JBJ Soul Kitchen, a non-profit community restaurant in New Jersey, diners pay a cash donation that covers their meal and a meal for someone in need.

Without its regular in-house volunteer base, the kitchen kept operations afloat with the help of the rock star dishwasher.

“There’s an in-need population here in New Jersey who depend on us,” Bon Jovi told CNN in April. “Hence, the All-Star Hall of Fame dishwasher is back in business.”

Over its 13-week takeout period, the restaurant provided more than 7,800 to-go meals to individuals, families, community partners and frontline workers.

At one point, Bon Jovi’s wife, Dorothea, took a picture of him washing dishes for social media. It was captioned, “Do what you can.”

The caption inspired him to pen a song and ask fans around the world to do their part as well.

“The songwriter in me came out, and I wrote the song ‘If You Can’t Do What You Do, You Do What You Can,'” he said. “I knew that people from all walks of life would have their stories to tell, so I invited them to write me a verse.”

From lyrics about missed graduations, fears, togetherness and health, Bon Jovi has been able to hear from and share experiences of fans and musicians around the world.

“It’s a great opportunity for me to stay in touch with people around the world and just let them know that I’m thinking of them,” he said. “It’s a reminder that, even if you can’t do what you do, you do what you can.”

Now, as New Jersey enters stage two of its reopening plan, JBJ Soul Kitchen has transitioned back to its pay-it-forward model, continuing to serve delicious meals with dignity.

“Our desire is to make sure that anyone who needs a meal knows that they can come and see us,” Bon Jovi said, “and we’ll provide them with that nutritious meal.”