George Floyd: protests take place in cities around the world 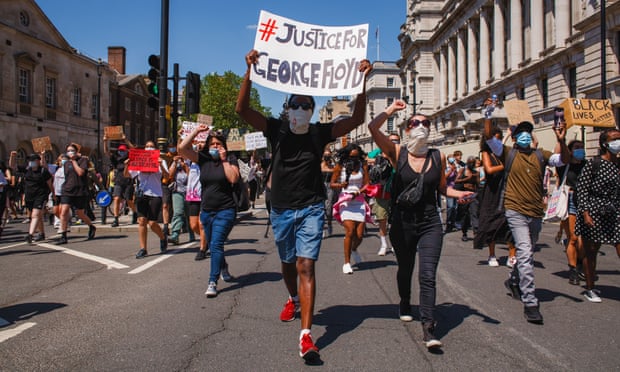 People in cities around the world have marched in solidarity with demonstrators in the US, as politicians and public figures unite to condemn the killing of George Floyd.

Floyd, an unarmed black man, died on 25 May in Minneapolis after a white police officer, Derek Chauvin, knelt on his neck for nine minutes while Floyd repeatedly complained that he could not breathe.

On Sunday, thousands of people demonstrated in central London, chanting: “No Justice! No peace!” in Trafalgar Square before marching to the US embassy, where they faced a line of police.

There were protests outside the US embassy in Copenhagen on Sunday, while hundreds of demonstrators gathered in Berlin for the second day in a row, carrying signs that read: “Silence is violence”; “Hold cops accountable”; and “Who do you call when police murder?”

At least four solidarity gatherings were held in New Zealand on Monday, with massive crowds kneeling at a demonstration in Auckland. Tens of thousands of people marched from Aotea Square, in central Auckland, to the US embassy carrying signs with messages such as “Be kind”, “Silence is Betrayal” and “Do Better, Be Better”.

Speakers called on the prime minister, Jacinda Ardern, to denounce the killing of Floyd as a hate crime, and show similar leadership as she did when a lone gunman killed 51 worshippers in a Christchurch mosque on 15 March last year.

In Australia, however, a demonstration planned for Tuesday afternoon in Sydney was cancelled on Monday, after people threatened to “create havoc and protest against the event”, an organiser said on social media.

Before the cancellation, the prime minister, Scott Morrison, had urged demonstrators not to “import things happening in other countries here to Australia”. He said the scenes in the US were “terribly disturbing, shocking” and “made [him] cringe”. Australia was “fair” and applauded police and other emergency workers, he added.

His comments came as many in Australia pointed out on social media that there had been more than 400 Indigenous deaths in custody since the end of a 1991 royal commission.

Thousands of protesters are expected at similar rallies planned for the Australian cities of Melbourne, Brisbane and Adelaide on Saturday.

The headline of Germany’s top-selling Bild newspaper on Sunday said: “This killer-cop set America ablaze”, with an arrow pointing to a photo of the now-fired officer, who has been charged with third-degree murder.

A memorial in graffiti appeared on a former part of the Berlin Wall depicting Floyd and the words: “I can’t breathe”, which he uttered as he was dying.

The English footballer Jadon Sancho was among several footballers playing in Germany to commemorate the events, lifting his jersey after scoring on Sunday to reveal a shirt emblazoned with the handwritten message: “Justice for George Floyd.”

The French national Marcus Thuram kneeled after scoring in Borussia Mönchengladbach’s win over Union Berlin. The Gladbach forward scored in the first half and then dropped his left knee to the ground for five seconds. “No explanation needed”, his side’s Twitter account wrote in a post showing Thuram kneeling. 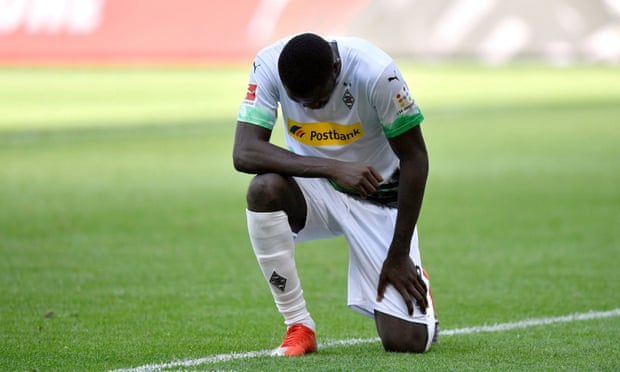 The head of the African Union Commission, Moussa Faki Mahamat, said Floyd’s death “firmly reaffirms and reiterates the African Union’s rejection of the continuing discriminatory practices against black citizens of the United States of America”.

There has been no official reaction from Japan but hundreds of people protested in front of Shibuya police station in Tokyo on Saturday after a widely viewed video clip showed two officers using force while questioning a 33-year-old Kurdish man on the street. 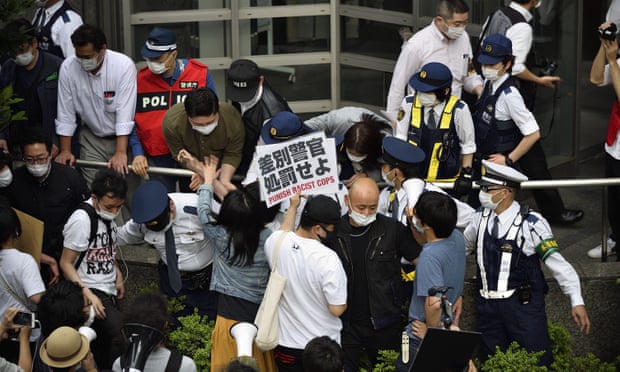 An estimated 200 foreign and Japanese protesters denounced Floyd’s killing and accused the officers of racism and using unnecessary force against the unnamed Kurdish man, who had reportedly been stopped in connection with an alleged traffic violation.

The video footage, shot by an acquaintance of the man, shows the officers forcing him to the ground while he insists he has done nothing wrong.

Floyd’s death also drew comment from regimes critical of the US that also have a record of violently suppressing dissent.

Iran’s foreign ministry spokesman, Abbas Mousavi, urged the US government and police to “stop violence against your people and let them breathe”, while the Russian foreign ministry said the US had “systemic problems in the human rights sphere”.

“This incident is far from the first in a series of lawless conduct and unjustified violence from US law enforcement,” it said.

Chinese officials and state media likened the unrest to the pro-democracy movement in Hong Kong and accused Washington of hypocrisy.

Zhao Lijian, a foreign ministry spokesman, said the protests “once again reflect the racial discrimination in the US [and the serious problems of police violent enforcement”.

Hu Xijin, the editor-in-chief of the nationalist tabloid Global Times, wrote on Saturday: “Mr President, don’t go hide behind the secret service. Go to talk to the demonstrators seriously. Negotiate with them, just like you urged Beijing to talk to Hong Kong rioters.”

US election: The most critical election in modern American history is here