US-China relations are at an all time low, but Trump still seems unsure how to handle Beijing 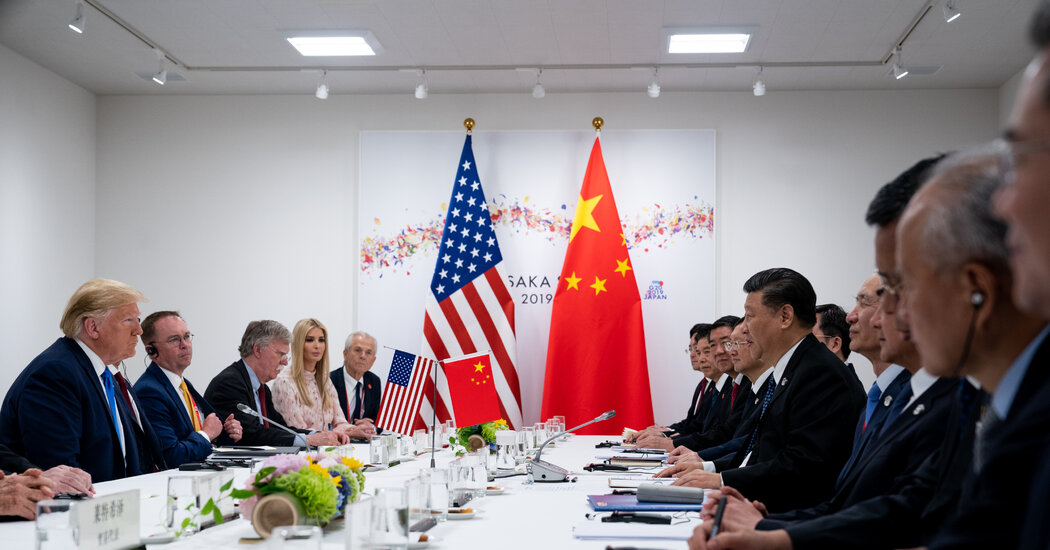 Early in his tenure, he visited Beijing, where he schmoozed with Chinese leader Xi Jinping in the Forbidden City, and praised the “very good chemistry” the two men shared. The following year, however, Trump launched a trade war against China, while simultaneously holding out for an historic deal between the two countries.
That deal is still outstanding, and seems unlikely to be achieved before the end of Trump’s term, especially as relations between Washington and Beijing have plummeted over issues such as the coronavirus, Hong Kong, and Xinjiang. Trump’s cabinet is packed with China hawks, and his secretary of state, Mike Pompeo, has become a figure of loathing in the Chinese media.
And yet parsing a coherent strategy on China from the White House can be tough. Even as he signed into law a bill stripping Hong Kong of its special trading status this week, Trump reportedly shied away from imposing sanctions against officials responsible for cracking down on the territory, according to Bloomberg, and he has not exercised his full powers under the act.
Throughout the trade war, Trump has frequently promised to secure an “unprecedented” deal that would open China up to American companies and rebalance the relationship in a way that benefits US farmers and workers. In signing phase one of that deal — which has now stalled — he described it as “righting the wrongs of the past and delivering a future of economic justice and security for American workers, farmers, and families.”

On Tuesday, Trump signed into law the Hong Kong Autonomy Act, a bipartisan bill passed with overwhelming support in both houses of Congress that strips the city of its special trading status with the US, on the grounds that a new security law imposed by Beijing means Hong Kong is no longer sufficiently autonomous from China to justify special treatment.

Trump used his speech announcing the move to hammer Beijing, saying that “no administration has been tougher on China than this administration.”

“We imposed historic tariffs. We stood up to China’s intellectual property theft, at a level that nobody has ever come close. We confronted untrustworthy Chinese technology and telecom providers,” he said. “We convinced many countries — many countries — and I did this myself, for the most part, not to use Huawei because we think it’s an unsafe security risk. It’s a big security risk. I talked many countries out of using it. If they want to do business with us, they can’t use it.”

He also — before laying into Democratic rival Joe Biden — blamed China for “concealing the (corona)virus and unleashing it upon the world.”

So far, so tough. According to Bloomberg, however, Trump has pushed back on plans to sanction top Hong Kong or Chinese officials, for fear of further damaging relations with Beijing. A spokesman for the National Security Council denied that any was “off the table,” and the President could still move to impose the penalties at any time.
The New York Times also reported this week that a draft administrative order had been drawn up targeting all 92 million members of the Chinese Communist Party. The order, which has not been made public and could be rejected by Trump, would aim to block Party members from traveling to the US, though it is unclear how practical or workable this would be.

While the Trump administration has taken general actions which hurt Hong Kong and China, some of this is expected to blow back on the US, which also relies on strong ties with both markets. Targeting officials meanwhile could focus the economic pain and inconvenience on individuals actually responsible for policy on Hong Kong.

At the same, however, it is likely to spark a retaliation from China. Already in response to the Xinjiang sanctions, Beijing moved to sanction US lawmakers, including Senators Ted Cruz and Marco Rubio, though what exact measures are to be taken have yet to be revealed.

Trade above all else

In announcing the Hong Kong law, Trump said that “one of the very big reasons … that I got elected in the first place” was “trade and things related to trade.”

He hit Biden for supporting China’s entry into the World Trade Organization, which Trump said was “one of the greatest geopolitical and economic disasters in world history.”

And while the ongoing trade war is — by most measures — exacerbating the economic pain of the coronavirus pandemic, Trump said that “our farmers are doing very well because we made really great trade deals.”

Trump’s reelection bid has focused in part on his ability to be tough on China, especially over the coronavirus, hitting Biden for his alleged ties or sympathy to Beijing. But that strategy does not seem to be paying off, with a recent poll showing the Democratic candidate with a 15-point lead over the President.

In his own words, Trump was elected because of his stance on trade. With even the slightest glimmer of hope for a trade deal still remaining, this might make him shy away from taking the hard line on China some of his advisers want, even as relations with Beijing seem to be at an unsalvageable point.

Bolton, in his book, wrote that “Trump’s conversations with Xi reflected not only the incoherence in his trade policy but also the confluence in Trump’s mind of his own political interests and US national interests.”

Were Trump able somehow to salvage an “unprecedented” trade deal with China, boosting the economy as he headed into the election, that could significantly change the eventual outcome.

“Trump commingled the personal and the national not just on trade questions but across the whole field of national security,” he said. “I am hard-pressed to identify any significant Trump decision during my White House tenure that wasn’t driven by re-election calculations.”