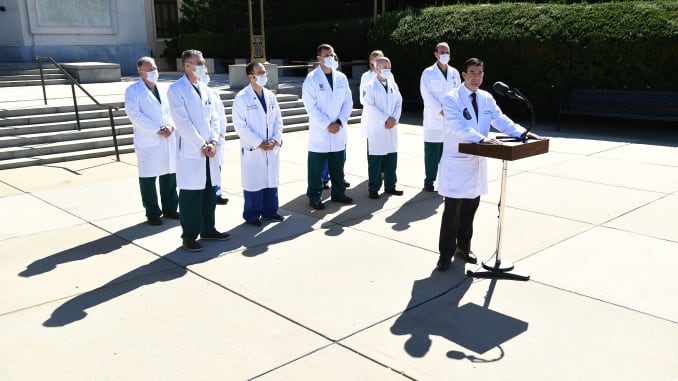 White House physician Sean Conley held a briefing on Saturday for the first time since President Donald Trump’s coronavirus diagnosis. But in it, he evaded many critical questions.

Trump, who announced his positive test result on Friday morning, has been at the Walter Reed National Military Medical Center since late Friday afternoon. A helicopter airlifted him from the White House, spurring speculation the president’s condition was worse than White House officials were revealing.

Conley’s Saturday press conference did little to assuage that speculation. He wouldn’t say whether Trump had at any point received supplemental oxygen, when the president last tested negative, or what temperature his fever reached.

Here are seven questions Conley declined to answer, what he said instead, and why the answers are important in gaining a full understanding of Trump’s infection.

But when pressed, Conley added, “I’m not going to go into specifics on what the findings on that are.”

The coronavirus can cause severe, potentially fatal lung damage. In extreme cases, COVID-19 patients can develop Acute Respiratory Distress Syndrome, a form of lung failure in which air sacs become filled with fluid. ARDS is one of the top causes of death from COVID-19.

Non-fatal lung damage, meanwhile, can impact a patient’s functioning far beyond the lifespan of the virus.

“It can take three months to a year or more for a person’s lung function to return to pre-COVID-19 levels,” Panagis Galiatsatos, a pulmonary physician at Johns Hopkins Bayview Medical Center, said, according to the university.

2. What was Trump’s temperature?

“I’d rather not give any specific numbers, but he did have a fever Thursday into Friday, and since Friday morning he’s had none,” Conley said.

A high fever could indicate a serious case of COVID-19. At exceptionally high temperatures, a fever could also cause Trump to experience hallucinations or delirium, which would undermine his ability to make high-level decisions as Commander-in-Chief.

3. Has the president received supplemental oxygen?

Reporters asked Conley about this several times, and he answered in evasive and even contradictory ways.

Conley finally gave a more detailed answer on the seventh time a reporter asked about it: “Thursday no oxygen. None at this moment. And yesterday with the team, while we were all here, he was not on oxygen.”

That answer avoids addressing much of Friday, before Trump was admitted to the hospital. The New York Times, the Associated Press, and ABC News have all reported that sources close to the president say he was on supplemental oxygen on Friday morning.

Oxygen levels are a critical indicator of a patient’s COVID-19 status: Low oxygen levels can lead to hypoxia, a condition in which regions of the body are deprived of critical oxygen. In severe cases, hypoxia can damage the brain and heart, cause a coma, or lead to death.

In a healthy person, oxygen levels should stay between 95% and 100%. Most experts agree that COVID-19 patients should be concerned if their levels drop below 90. Trump’s oxygen level was at 96% on Saturday, doctors reported, but if he previously received supplemental oxygen, that raises concerns his levels could drop again – and also suggests Conley wasn’t being fully transparent.

4. Is there any consensus about how Trump got infected?

“I’m not going to go into that. As far as his care, it’s irrelevant,” Conley said.

The source of Trump’s infection could be relevant to his care if it gives doctors a sense of what quantity of the virus the president might have been exposed to.

What’s more, understanding who most likely transmitted the virus to Trump could aid in contact-tracing efforts to find and notify others who might be at risk. Pinpointing “Patient Zero” — whoever caused what’s increasingly looking like a super-spreader event at the White House — would be especially useful for contact tracing.

5. What about when he became infected?

“We’re not going to go into that. We’re just tracking his clinical course and providing the best care we can,” Conley said.

Knowing when Trump was infected could further help contact tracers find and notify anyone who was exposed to the president while he might have been infectious. In the days before he tested positive, Trump came into contact with hundreds of people at fundraisers, rallies, an event for Supreme Court nominee Amy Coney Barrett, and the presidential debate. At many of these events, plenty of attendees were mask-less and in close proximity.

6. When was the president’s last negative coronavirus test?

“I’m not going to get into all the testing going back, but he and all his staff routinely are tested,” Conley said.

This is also crucial information for contact tracing, since it would reveal the last known time that Trump was probably not infectious. If your body doesn’t have enough virus to register on a PCR test, it’s unlikely that you would transmit it.

“Knowing the timeline of the president’s last negative test, and when he became symptomatic, and when the positive tests was resulted — knowing that timeline is the only way you can really determine whether or not Joe Biden was a significant exposure,” Amesh Adalja, a senior scholar at the Johns Hopkins University Center for Health Security, told Business Insider.

7. Is Trump taking any steroids?

At this question, Conley ended the briefing and left the podium.

Studies have shown that corticosteroids like dexamethasone can improve survival rates for people with severe cases of COVID-19. A recent analysis showed that 68% of the sickest patients survived after being given steroids, compared to 60% of those who didn’t get the treatment.

The key word here, though, is severe. So far, steroids have only shown promise for people with serious cases – in fact, one study found that patients with mild COVID-19 cases who took dexamethasone died at slightly higher rates than those who didn’t.

So if Trump is taking a drug like that, it would indicate his doctors think his case is severe.