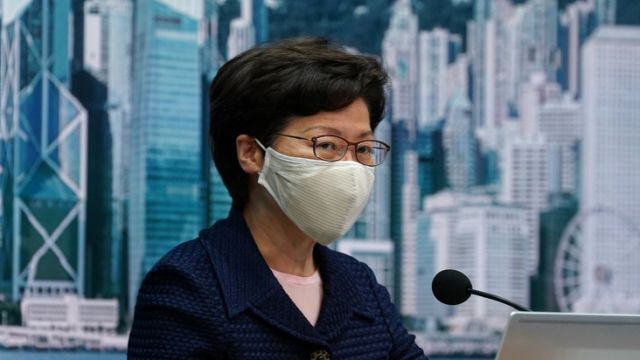 Chinese state-run media reported that the men are wanted by authorities for “incitement to secession” under a sweeping and controversial national-security law passed last month, according to The Guardian.

The individuals include Samuel Chu, a US citizen who runs the Washington, DC-based Hong Kong Democracy Council, as well as activists who have fled Hong Kong for the UK, Germany, and one undisclosed country, BBC reported.

The law targets “secession,” “subversion,” “terrorist activities,” and “collusion with a foreign country,” and carries life sentences as punishment for many of the offenses. It has received pushback from critics who say it could be used to crush political dissent in Hong Kong.

They’ve also slammed a provision of the law that applies it to both residents and non-residents of Hong Kong as part of an effort by authorities to claim jurisdiction outside their own borders. Chu’s warrant marks the first reported instance of the law being used against a foreign national.

Since the law was passed last month, pro-democracy political organizations have disbanded as their leaders fled the region, and police have used the law to arrest protesters.

Several countries, including Taiwan, the US, and the UK, have introduced political protections for Hong Kongers fleeing due to the law, while some have ended their extradition treaties with the region.

Hong Kong, a former British colony that has formally operated separately from the rest of China under a policy called “one country, two systems” since it was handed over to China in 1997, has seen its relationship with the mainland deteriorate in recent years as Beijing cracks down on its independence.

On Friday, Hong Kong announced that it would postpone legislative elections originally set for September for one year, citing coronavirus concerns.

“It is a really tough decision to delay, but we want to ensure fairness, public safety and public health,” said Hong Kong Chief Executive Carrie Lam, according to The New York Times.

But the move drew pushback from activists who alleged Hong Kong was using the pandemic as a pretext to halt the momentum of pro-democracy candidates. A day earlier, Hong Kong disqualified a dozen candidates from running in the election, accusing them of colluding with foreign countries and opposing the security law.

The White House condemned the move, despite Trump making a similar suggestion last week about delaying the US presidential election — a decision he does not have the authority to make. Trump cited concerns around mail-in voting fraud, which have largely been debunked.