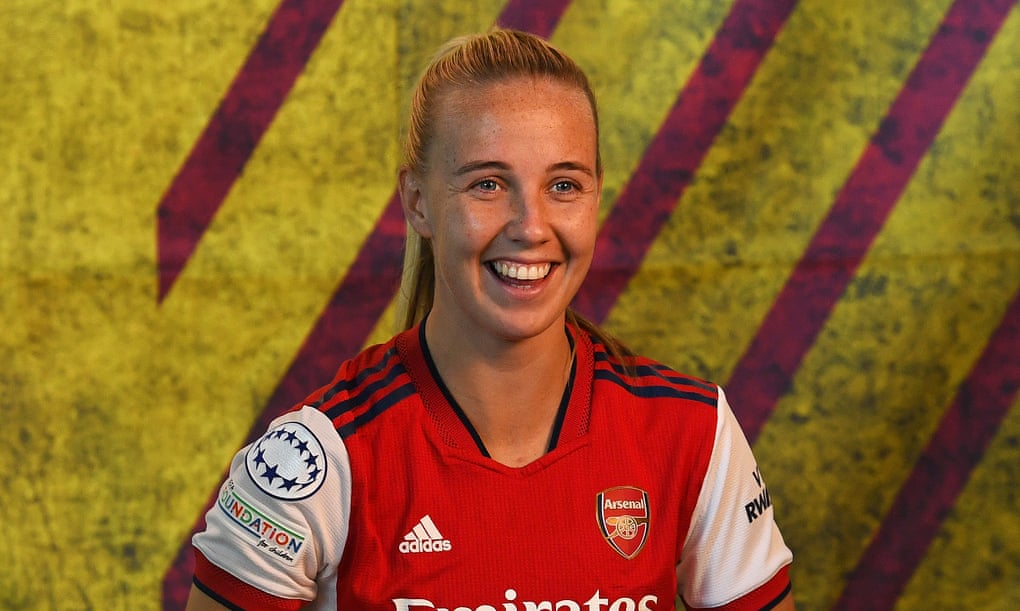 he Arsenal forward Beth Mead is reflecting on the bruising 4-1 defeat by Barcelona in their opening Champions League group game. “The girls have been humbled in a good way,” she says. “It was a tough game.

“Right now, they’re the best team in Europe, if not the world. At times they were unplayable. We’ve looked at ourselves in the mirror and we’ve worked hard on what we need to do better. In the long run that game is going to help us. We’ve got a lot more games to play in the Champions League.”

In many ways the best time to play the reigning European champions is in the group stage, when the result may not affect progress to the quarter-finals.

“They’ve played together a long time, they’re at a different stage compared to us,” says Mead. “We’re in a transition. We’ll try our best to get to a good level where everyone finds it pretty difficult to play against us. Barça put us under a lot of pressure, didn’t give us room to breathe, didn’t let us get out to play and that’s physically and mentally so hard.”

Arsenal, Mead continues, tried to play that way in their 3-0 defeat of Everton in the following match. “That game is already helping us,” the 26-year-old says. “We can take a lot from it.”

The manner of Barcelona’s dismissal of Arsenal was familiar. The Gunners have swept aside teams with similar ease in the Women’s Super League this season and Mead has been at the heart of it.

In the opening game, a 3-2 win against champions Chelsea, Mead scored twice and was poignantly photographed with arms outstretched in front of a crowd at the Emirates Stadium for the first league fixture there. Having been left out of Team GB’s Olympics squad, it was cathartic.

“I took that hard,” says Mead, whose form has made her the Barclays WSL player of the month for September. “But I was lucky enough to have the time off to get over that disappointment and then channel it back into my football, so to start the season off like that was a dream come true. I wanted to come back and prove why I should have been at that Olympics and what a way to start at the Emirates in front of an amazing crowd, scoring two goals against Chelsea.”

With Arsenal having added the US World Cup winner Tobin Heath, Mead’s fellow England forward Nikita Parris and the Japanese maestro Mana Iwabuchi to a strikeforce spearheaded by the Ballon d’Or nominee Vivianne Miedema the pressure was on Mead to perform.

“What a team, what players, wow,” says Mead. “It’s the depth and strength we needed for a long time. Jonas [Eidevall, the manager] right now could play two different forward lines. You can’t have a bad day in training. You’ve got to be training really well and competition really works well for me, it makes me a better player, it makes me more motivated. Sometimes you don’t realise but you can become quite complacent. And right now, you can’t do that.”

The Whitby-born former Sunderland forward thinks she is in the best form of her career: “I feel good, I feel fit, mentally I feel good but I do have a lot more to give. It’s a long season and now I’ve got to do what I’m doing consistently. That’s what the best players in the world do and that’s what I aspire to.”

In a weird way, missing out on the Olympics has helped. “You’ve always got a look at the positives and a positive for me was that I got to switch off from football, refresh my mind and my body and have a proper pre-season,” says Mead, who named her dog Rona after the coronavirus after getting her during lockdown, calls her Rona Corona and describes her as her “saving grace” in getting over her Olympic heartbreak. “I worked very hard in preseason to get my fitness levels up.”

Having also been cut from England camps before the Olympics Mead is back in the fold under Sarina Wiegman. “ “Sarina has brought a new energy, which we probably needed as an England team. We’ve always been a team that’s worked hard – that’s a given – but she’s told us to slow down and enjoy the football a little bit more and I think in the long run that’s going to help us massively.”

The next goal is getting through this camp, during which England play Northern Ireland and Latvia, and the next Arsenal games so as to make the squad that will play Austria at Sunderland’s Stadium of Light in November.

I’d love to be there,” she says with a big grin. “I’ve not been to Sunderland in a long time and I actually never got the opportunity to play at the Stadium of Light … I wish we played more northern games.”

The aim for the season? “Score more goals,” she says simply. “I just want to continue contributing goals and assists and winning balls back. I want to be the best version of myself … It’s an exciting season, we have the quality and the calibre of players to win things. But saying it and doing it are two different things.”