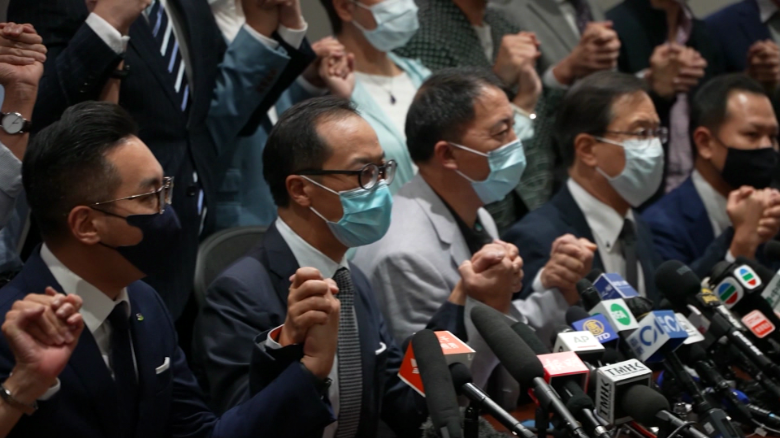 Sat in the city’s Court of Final Appeal, wearing a black robe, ruffed white collar and white face mask, Chief Justice Andrew Cheung acknowledged the strangeness of the circumstances as he addressed a small audience of judicial officials and others watching online.

“The Covid-19 pandemic has taken a great toll everywhere,” Cheung said. “The judiciary and its operations have also been affected, and thanks must be extended to our judiciary staff who have worked so hard in such difficult circumstances to keep the courts functioning.”

That law criminalizes acts of secession, subversion, terrorism and collusion with foreign forces, and carries with it a maximum sentence of life imprisonment.

Such vague parameters have provided authorities with sweeping powers to crack down on government opponents as Beijing continues to tighten its control over the purportedly semi-autonomous city. Hong Kong officials had previously promised that the law would be limited in effect, and only target a small number of fringe activists. However, critics allege that since its introduction, the law has been used to forcefully stamp out the city’s formerly vibrant pro-democracy movement.

Last week, 53 opposition activists, many of them former lawmakers, were arrested under the law, accused of subversion for taking part in a primary poll designed to choose candidate for legislative elections last year — elections that were subsequently postponed due to the pandemic.
All but one of those arrested have since been bailed. But their cases, along with the other dozen or so people arrested under the law, will consume much of the courts’ focus in the coming year. Close attention will be paid to how the courts apply the sweeping and so far largely untested law, which was directly imposed by Beijing, bypassing Hong Kong’s semi-democratic legislature, and contains clauses which may conflict with existing constitutional and treaty protections for speech and assembly.

With both the legislature and the administration in lockstep with Beijing, the courts are the one branch of government which retains some degree of autonomy — but one which may be sorely tested by the blunt instrument of the security law.

In his speech, and in a press conference afterward, Cheung avoided discussing the specifics of the law, arguing that to do so was inappropriate, given it will soon be discussed in court. But he came back to one key point again and again.

“It is my mission to do my utmost to uphold the independence and impartiality of the Hong Kong judiciary,” Cheung told reporters. “That is my mission, and I will do my best to fulfill that mission.”

Such independence may be sorely tested in the coming year, and if lost could have great costs for Hong Kong’s legal system and fundamental freedoms. In a speech following Cheung’s, Philip Dykes, head of the city’s Bar Association, noted that “without judicial independence, a pearl of great price, we might as well pack up our bags and steal away, for Hong Kong is nothing without it.”

Throughout its century-and-a-half as a British colony, the rule of law — equality before the courts, due process, and the presumption of innocence — came to be seen as the city’s “defining ideology,” one that helped Hong Kong become a global financial capital, a safe harbor for businesses to choose as their Asian headquarters confident that their rights would be protected, in contrast to the often arbitrary exercise of justice elsewhere in the region.

When Hong Kong was handed over to the People’s Republic of China in 1997, the city’s new rulers, keen not to disrupt their economic dynamo, were careful to pay lip service to the importance of the rule of law and independent judiciary to Hong Kong’s continued success under the principle known as “one country, two systems.”

Hong Kong’s legal system did not always have the stellar reputation it now boasts. When the British established their colony on the newly seized territory in 1842, they gave little thought to how the crown’s new Chinese subjects would access justice.

“In colonial Hong Kong, racial bigotry and prejudice added to the social injustice inherent in the strong class division in Victorian Britain, and they were reflected in the working of the courts,” writes Steve Tsang in “A Modern History of Hong Kong: 1841-1997.” The language of the courts was English, and interpreters were rarely provided — meaning many Chinese defendants were unaware of what was going on as they were railroaded by an unfamiliar legal system and unsympathetic judges.

However, Tsang notes that even in the early years, when discrimination was rife, the “rule of law determined the structure and procedures of the legal system, restrained some governors from pursuing certain policies harmful to the local community and helped to secure the acquittal of many wrongly accused.”

Post-1997, the rule of law also helped limit the city’s new rulers. Thanks to its strong protections for speech and assembly, Hong Kong retained a vibrant political and media scene unlike anything seen in China, with annual demonstrations — such as the June 4 memorial for the Tiananmen Square massacre — iconic of these freedoms.

But the conflict between the country and the two systems it contains has grown over time, reaching breaking point in recent years.

China’s legal system stands in stark contrast to Hong Kong’s, being highly politicized and almost completely controlled by the ruling Communist Party. In criminal cases, some 99% of prosecutions end in a guilty verdict, and sentences can often be wildly inconsistent, depending on political circumstances, even when the facts of the case are similar. In civil matters, companies and defendants cannot be confident the courts will protect their rights if they conflict with the wider political or economic goals of the Chinese state.

The prospect of being subject to Chinese justice, through an extradition bill with the mainland, sparked the anti-government unrest that rocked Hong Kong in 2019. Yet while the protests were successful in defeating the proposed legislation, they also prompted the eventual imposition of the national security law last year, creating a number of political crimes and undermining protections contained within Basic Law, Hong Kong’s de facto constitution, while also creating the possibility for defendants to be transferred to China for trial in some circumstances.

Such a broad and sweeping law would pose a challenge for the courts to interpret in the best of times, but the security legislation has been accompanied by a climate of immense pressure on the judiciary to deliver harsh sentences to protesters and other dissidents, similar to how cases are handled in China.
Judges seen as overly lenient or sympathetic toward protesters have been attacked in Chinese state media and pro-Beijing newspapers in Hong Kong. Writing in the state-run China Daily late last year, one commentator said that “in theory, judges must not take political sides in a court of law, but in Hong Kong many members of the public now see some judges as ‘yellow judges’ who practice political favoritism for offenders from the opposition camp.”
In November, Zhang Xiaoming, one of the top Chinese officials in Hong Kong, said “reforms” were needed for the city’s judiciary, and “the word ‘patriotism’ should be added before the core values ​​of democracy, freedom and human rights advocated by Hong Kong society.”

“We must defend the city’s rule of law, but we must also safeguard the national constitutional order,” Zhang said, adding that many “problems” had been exposed in Basic Law that needed to be addressed.

In his comments this week, Cheung, the new chief justice, appeared to address these controversies, noting that in certain cases, judges have “come under intense scrutiny” and been subject to “partisan criticisms.”

“Whilst the freedom of speech of everyone in society must be fully respected, there must not be any attempt to exert improper pressure on the judges in the discharge of their judicial functions,” Cheung said. “Judges must be fearless and be prepared to make decisions in accordance with the law, regardless of whether the outcomes are popular or unpopular, or whether the outcomes would render themselves popular or unpopular.”

But what exactly the law means may be a moving target as Beijing takes a more hands-on approach to Hong Kong’s legal system.

Under the Basic Law, while Hong Kong has a “Court of Final Appeal,” the true arbiter of the city’s constitution is China’s National People’s Congress, the country’s rubber-stamp parliament, which can issue “interpretations” of various articles of the Basic Law — essentially rewriting it on the fly.

In the past, this power was rarely used, but it has been exercised more and more in recent years. Observers have expressed concern that, should Hong Kong courts apply the national security law more leniently than Beijing would want, the national government may step in to force them to do otherwise.

“Respect for autonomy and Hong Kong’s authority to discharge its duties under the new law requires the (National People’s Congress) to exercise restraint in its power of interpretation,” wrote Simon Young, a law professor at the University of Hong Kong, when the law was first promulgated. “Excessive intervention will destroy the separate systems model and cause great legal instability.”
But comments made by Zhang and other officials, such as declaring that there exists no “separation of powers” in Hong Kong, suggest a central government unwilling to sit by and let the city’s courts decide as they please.

And responding to a question about such interventions by the central government, Cheung acknowledged there was little Hong Kong judges could do. “When there is an interpretation, the court must follow,” he said.

In an interview this week, Young noted that the “central and local governments have full confidence in the new Chief Justice,” which could preclude a barrage of interventions in the near future.

“The first batch of (security law) cases to proceed to the courts will be seen by all as test cases to see the true width and limits of the law,” he said. “My prediction is that there will not be any direct interference from (Beijing) to influence or change the results of these cases.”

Tsang, the Hong Kong historian and director the SOAS China Institute in London, disagreed, however, predicting the Chief Justice “will come under enormous pressure” in coming years.

“(This) will be extremely difficult for the Chief Justice to resist over the long term, which means that the erosion of judicial independence is unfolding, and unless there is a change of government in Beijing unlikely to relent,” he said.

In his final address this month, Cheung’s predecessor, Geoffrey Ma, urged him “always to be guided by your principles, for it is these principles that will see you and the community through all seasons.”

But Tsang said Cheung, in accepting this role, may have put himself in an impossible position.

“The efforts to protect Hong Kong’s judicial independence is now a rearguard operation, and the determination of the Chief Justice to stand fast or not will only determine the pace of this process,” Tsang said. “He is unlikely to be able to hold the line beyond the short-term however determined he may be.”