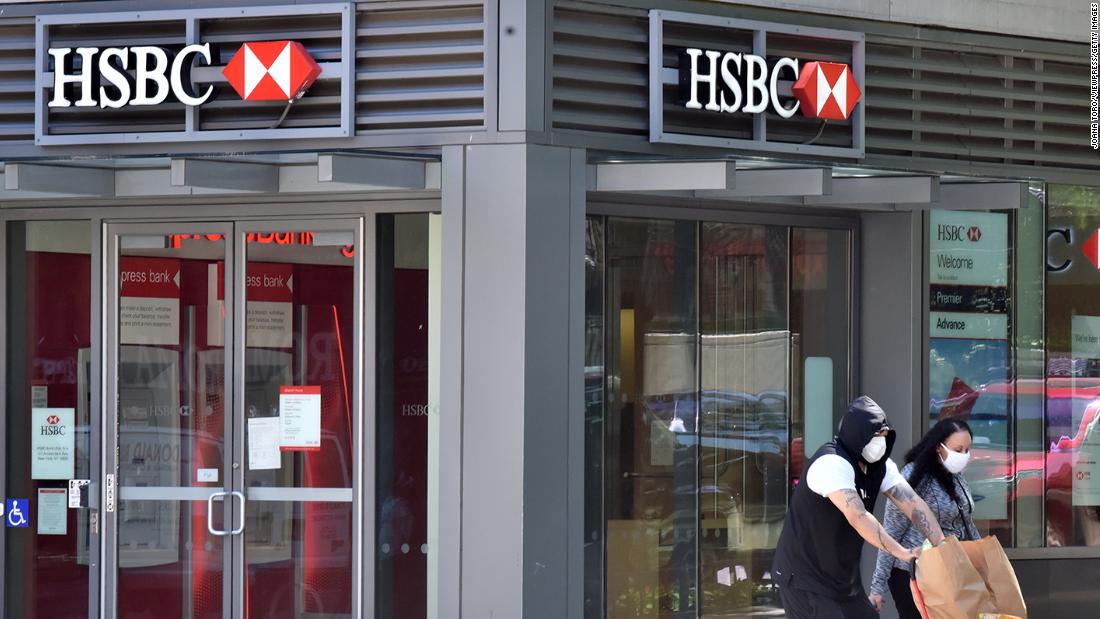 China’s ambassador to the United Kingdom, Liu Xiaoming, responded this week by accusing the country of “gross interference” in Hong Kong and saying any treatment of China as an enemy is “completely wrong.”

HSBC’s relationship with both countries makes it an obvious target as relations worsen, according to Willy Lam, an adjunct professor for the Center of China Studies at the Chinese University of Hong Kong.

Even though the bank has been based in the United Kingdom since 1992, Hong Kong is its biggest market and accounts for over half of the group’s profits. Asia more broadly delivered more than 80% of HSBC’s profits last year. The bank is planning to shift more resources to the region in the near future as it carries out a sweeping restructuring plan.
HSBC (HSBC) declined to provide further comment on its support for the law. But the firm’s leaders have reasons to be worried about potential fallout.
HSBC Chairman Mark Tucker has privately warned the British government that the bank could face reprisals from Beijing if Huawei, the Chinese tech giant, is prevented from doing business in the United Kingdom, The Telegraph reported last month, citing anonymous sources.

HSBC was founded in 1865 by Scottish businessman Thomas Sutherland, who took inspiration from his home nation’s flag to create the bank’s iconic red and white hexagonal logo.

Until the 1990s, it was generally referred to simply as “Hong Kong bank,” according to historians David Kynaston and Richard Roberts, who tracked the company’s rise in the book, “The Lion Wakes: A Modern History of HSBC.”

It once even acted as Hong Kong’s unofficial monetary authority in some capacities as the city’s economy opened up to the world, printing currency and setting the stage for foreign exchange, Kynaston and Roberts wrote.

“It could be said that we are a quasi-central bank,” HSBC’s former chairman, Michael Sandberg, is quoted in the book as saying in 1976. “Hong Kong’s interests and well-being are very much in tune with ours.”

In 1992, HSBC moved its headquarters to London to comply with takeover regulations after acquiring Midland Bank, a large British retail bank that helped its new owner almost double its employee headcount.

Since then, the company has periodically mulled the idea of relocating its headquarters away from London.

In 2015, the same year the bank announced a “pivot to Asia,” the board deliberated the move, conducting a 10-month review of its operations around the world. Hong Kong was seen as the natural choice, given its deep roots there and the allure of lower corporate taxes. But the company’s directors ultimately decided to stay put.
Former CEO Stuart Gulliver said at the time that having headquarters in the United Kingdom and a “significant” chunk of the business in Asia Pacific “delivers the best of both worlds to our stakeholders.”

Even as the company’s business grows elsewhere, HSBC may want to stay in London so as to not lose its status as a globally focused bank, according to Dragon Tang, a professor of finance at the University of Hong Kong. He added that moving away from the United Kingdom could be seen as a sign of giving up on the European market.

A company spokesperson referred CNN Business to a previous statement that said “there are no discussions to review HSBC’s global headquarters, and no plans to reopen the issue.”

HSBC has a lot riding on Hong Kong — and politicians know it.

In May, former Hong Kong leader Leung Chun-ying singled out the bank for its silence on the law, demanding that HSBC express its support.
“HSBC’s profits come mainly from China,” Leung wrote in a Facebook (FB) post. “Neither China nor Hong Kong owe HSBC anything. Its business in China could be replaced overnight by banks from China or other countries.”
Leung also told the Financial Times that month that “HSBC has been enjoying unique privileges in Hong Kong, which should not be taken for granted.”
Days later, HSBC posted a photo on Chinese social media showing its Asia Pacific CEO signing a petition supporting the national security law in Hong Kong. (The photo was published before the law was passed and before the full legal text was published.)
It didn’t take long for Britain to respond. UK political leaders piled on the bank last month, questioning why the company would allow one of its executives to make such a political statement.

“I just thought, ‘Wow,'” said Alistair Carmichael, a British lawmaker who joined several members of parliament in writing to HSBC to express concern about the move. He argued that by caving to Beijing’s demands, the company has essentially “offered themselves up” as a political football.

“They did themselves no good whatsoever,” Carmichael told CNN Business, adding that he and his colleagues had yet to hear back from the bank. “Once you pick a side, it’s very hard to walk away from that side.”

HSBC declined to comment on criticism the bank has received from UK politicians.

The bank has also long been floated as a potential target for retaliation by Beijing in its battle with the West over trade, technology and national security.

Huawei, for example, has for months been trying to persuade the UK government that it can be trusted to help build the country’s 5G network — a partnership that looks increasingly like it might fall apart.

Liu, the Chinese ambassador, warned this week that Britain “will have to bear the consequences” should it treat China as a “hostile country.”

And while he didn’t mention HSBC by name, Chinese state media has previously suggested that the bank could appear on a long-rumored list of “unreliable” foreign companies that China could blacklist.

Retaliation from China isn’t all that HSBC needs to worry about. US Secretary of State Mike Pompeo has blasted the company for its actions, saying that “corporate kowtows” would not earn the bank respect in Beijing.

On Tuesday, Bloomberg reported that Washington was also looking for “ways to punish banks based in Hong Kong, particularly HSBC.” One proposal that is being considered, according to the report, is to damage the peg between the Hong Kong dollar and the US dollar.

HSBC declined to comment on the news report. The company’s Hong Kong-listed shares fell 4.3% on Wednesday after the report, while its shares listed in London dropped 2.9%. The stock continued to slump Thursday in Hong Kong.

There’s unease within HSBC’s staff, too. An HSBC employee who has been with the bank for several years told CNN Business that workers in Hong Kong were upset when they learned of the company’s support for the law.

“I am so disappointed,” said the employee, who requested anonymity because he feared being targeted for his comments. “Obviously, the bank could imagine that there are some concerns.”

HSBC declined to comment on the reaction from staff.

The employee said that he wrote to management last year expressing concern about Hong Kong’s increasingly politicized business environment, and that the company had assured him it would stay out of the political fray.

“I used to be very proud of the bank,” he said. But “if you asked me the question of whether I feel proud or not to be one of the members in this bank, definitely the answer at this moment would be ‘no.'”

As diplomatic tensions simmer, some observers caution that the company could be forced off the political fence again.

“They are between the devil and the deep blue sea. They will want to see how the situation in China and Hong Kong settles down. They’ll want to see how much the political heat in the UK persists,” Philip Augar, a UK banking expert, told BBC Radio 4 on Tuesday.