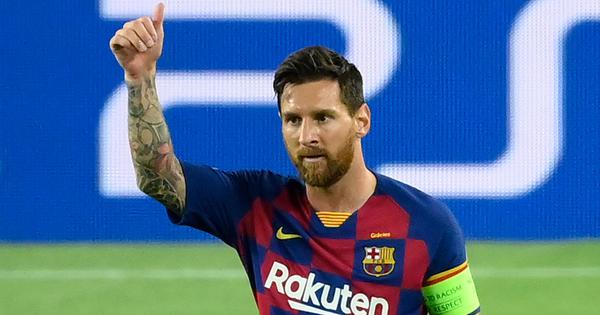 Under La Liga rules, without passing a test, Messi will be unable to take part in pre-season training under new coach Ronald Koeman, with the 2020-21 season set to start in two weeks.

Club sources told that the rest of the Barcelona first team squad had taken the test, with Messi the only absentee.

Luis Suarez — Messi’s friend and strike partner — was among those seen arriving at the Ciutat Esportiva training ground, despite reports that the Uruguayan international is not part of Koeman’s plans for the new season.

Messi most certainly is, but the 33-year-old club legend stunned Barca chiefs on Tuesday by submitting a transfer request, sent by Burofax to the offices at Camp Nou.

Sunday’s missed test will only increase speculation that the six-time Ballon d’Or winner is determined to end his 20-year association with the Catalan giants.

According to multiple reports, Messi believes he has a clause in his contract which allows him to leave Barcelona for free this summer.

Reportedly, the clause expired on June 10, but Messi and his connections believe he still has the right to activate it now due to the season being extended because of the pandemic.

However, Barcelona insist that he must see out his contract, unless a release clause is paid, believed to be 700 million euros ($833 million).

“The position of the club is that Messi has a valid contract until June 30, 2021,” club sources told.

Barcelona’s position appeared to be strengthened on Sunday as La Liga issued a statement insisting they would only recognize Messi’s transfer if that release clause is paid.

“In compliance with the applicable regulations, and following the corresponding procedure in these cases, La Liga will not carry out the prior visa process for the player to be removed from the federation if they have not previously paid the amount of said clause,” their statement read.

Barcelona’s season ended with the humiliating 8-2 defeat to eventual winners Bayern Munich in the quarterfinals of the Champions League.

With arch-rival Real Madrid clinching La Liga, Barca ended the season without silverware for the first time since 2007/08, hastening the departure of coach Quique Setien, with former player Koeman installed.

Even before those setbacks, Messi’s dissatisfaction with the club’s overall direction had become clear, coming to a head in February when sporting director and former teammate Eric Abidal accused the players of a lack of effort to get former coach Ernesto Valverde sacked.

Messi responded with pointed messages on his Instagram account, forcing under fire club president Josep Bartomeu to call an emergency meeting with the pair.

Abidal has also paid the price for the Bayern defeat, leaving the club. Whether Messi follows will be the subject of fevered speculation over the coming weeks, with big-spending Manchester City and Paris Saint Germain linked with his signature.