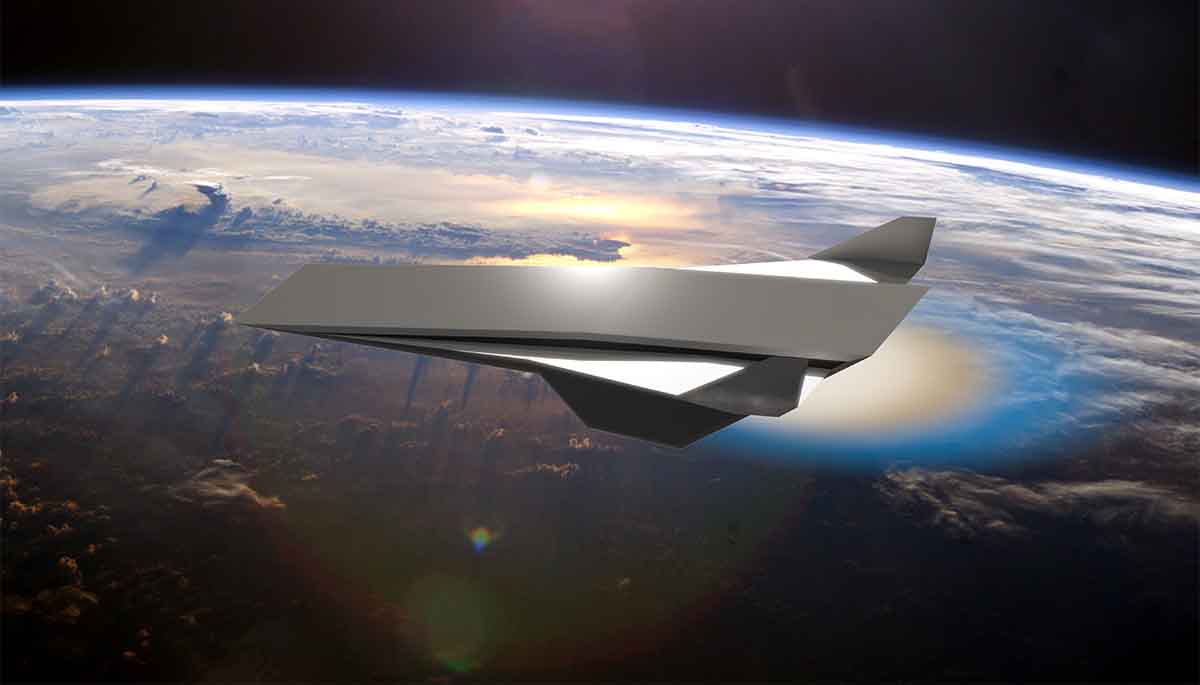 In a recent research, it has been tested that the new oblique wave detonation engine may unlock speeds over Mach 17. This sounds like the new engine could power aircraft up to 17 times the speed of sound, potentially beating the scramjet as a hypersonic propulsion method.

Researchers from the University of Central Florida (UCF) claim to have successfully captured a sustained explosive detonation and fixed it in place for the first time. They were able to channel the enormous power of the detonation into thrust for a new oblique wave detonation engine. This engine has the potential to propel an aircraft up to 17 times the speed of sound and could potentially beat the scramjet as a method of hypersonic propulsion.

Because deflagration, also known as the high-temperature burning of fuel with oxygen, is a relatively slow way to release chemical energy and turn it into motion, as well as a safe and controlled way to do so, this pleasant and peaceful form of combustion is the basis for a significant portion of our transportation technology. However, if you want to extract the most amount of energy from a given quantity of fuel, you will get a lot more “bang for your buck” from something that actually goes bang.

The process of detonation is lightning-fast, disorderly, and frequently destructive. It only requires a single explosive element and some form of energy poke that is powerful enough to disrupt the chemical bonds that are holding an already unstable molecule together. Oxygen is not needed required for this process. It results in the production of exothermic shockwaves, which travel in all directions at supersonic speeds, thereby releasing a large quantity of energy.

For more than 60 years, people have been trying to harness the raw power of detonation, which is the most powerful kind of combustion. However, putting a bridle on a bomb has proven to be a very tough task. In a manner that is analogous to that of a pulse jet, pulse detonation engines produce a series of repeated explosions. These engines have already been tested in aircraft, most notably in the Scaled Composites Long-EZ “Borealis” project, which was constructed by the United States Air Force Research Laboratory and Innovative Scientific Solutions Incorporated in the year 2008.

Now, another team from UCF, including some of the same researchers that built the rotating detonation engine last year, says it has managed a world-first demonstration of an elusive third type of detonation engine that could out-punch them all. This would theoretically open up a pathway to aircraft flying at speeds of up to 13,000 mph (21,000 km/h), which is 17 times the speed of sound.

The standing wave, also known as the oblique wave detonation engine (OWDE), is designed to produce a continuous detonation that is stable and fixed in space. This will result in a propulsion system that is controllable, ruthlessly efficient, and generates significantly more power while consuming significantly less fuel than is possible with the technology that is currently available.

The team from the University of Central Florida (UCF) says that they have successfully stabilised a detonation wave under hypersonic flow circumstances. By doing so, they have prevented the wave from moving upstream (where it could cause the fuel source to detonate) or downstream (where it would lose its explosive advantage and fizzle out into a deflagration).

In order to accomplish this goal, the group constructed an experimental prototype that they referred to as the High-Enthalpy Hypersonic Reacting Facility – or HyperReact for short. The HyperReact is a device that is shorter than one metre (3.3 feet) in length and can be informally defined as a hollow tube. It is separated into three pieces, each of which has a specifically formed interior.

The first part of the apparatus is a mixing chamber that is 350 millimetres (13.8 inches) in diameter and has 45 millimetres (1.8 inches) sidewalls. At this point, a jet of hydrogen fuel that has already been pre-mixed with air is being ignited by a pre-burner. The flow of air is accelerated to the proper speeds by the addition of four extra air channels surrounding the pre-burner jet.

The second segment is called a converging-diverging (CD) nozzle, and it has a square cross-section that is axisymmetric the entire way down. Just before the hot, fast, and high-pressure air coming down the tube enters the CD nozzle, the main fuel injector adds 99.99 percent ultra-high-purity hydrogen fuel to it. The CD nozzle quickly tapers down to a 9-mm-high (0.35-in) throat before diverging back out to a 45-mm square again. Before entering the final “test section,” which is where the detonation takes place, this form is intended to accelerate the mixture to a maximum speed of Mach 5.0.

The hypersonic air and fuel mixture is drawn into the test section, where it is then propelled upwards along a ramp angled at 30 degrees on the underside of the square tube. The team was able to find parameters that manipulated the pressure wave interactions in the chamber by adjusting the flow speed and the air/fuel mix. As a result, they were able to produce the unthinkable: a stable, continuous explosion that remained almost still, fluctuating slightly in a cyclical pattern, and was located over the front lip of the ramp.

Peak pressure was found to be 2.7 times greater behind the ramp, and the nozzle exit pressure was found to be 10.5 times higher, as compared to conditions that were measured with the primary fuel injector turned off. The flow velocity was estimated to be 99.7 percent of the theoretical detonation wave speed for a freely propagating, normal explosion in the given combination. This conclusion was reached through the use of flow velocity calculations.

According to Kareem Ahmed, an associate professor in the Department of Mechanical and Aerospace Engineering at the University of Central Florida (UCF) and one of the writers on the newly published study paper, “This is the first time a detonation has been proved to be stabilised experimentally.” We have at long last achieved the capability of holding the detonation in space in the form of an oblique detonation. It’s almost like you’ve managed to freeze an explosive explosion somewhere in physical space.

In contrast to the average duration of a detonation, which is only a few microseconds or milliseconds, the UCF team was able to maintain this detonation for the duration of the experiment, which was approximately three seconds. According to Ahmed, who works for LiveScience, that amount of time is sufficient to demonstrate that the device is operational. If the team had kept the fuel flowing for any longer, it would have destroyed the quartz windows that were installed on the sides of the test section in order to enable optical imaging of the tests. If the test part were replaced with something that was wholly made of metal, the detonation could be maintained for a significantly longer period of time.

Ahmed claims that the design of the OWDE prototype is reasonably similar to what the final product of a full-scale production of the OWDE would look like. Now comes the difficult part: figuring out how to dynamically change the fuel mix, flow speed, and ramp angle in order to maintain a detonation’s stability, reliability, and controllability across a broad spectrum of operating conditions and control inputs.

In the realm of theory, the OWDE has been discussed for some time as a form of hypersonic propulsion that has the potential to be superior to the scramjet. Scramjets have a tendency to decrease efficiency as airspeed increases, with a potential limit of roughly Mach 14 for their maximum speed. The experimental findings that were made public by the University of Central Florida (UCF) lead in the direction of a “Sodramjet” (standing oblique detonation ramjet) aircraft that is capable of flying at speeds ranging from Mach 6 to Mach 17.

What exactly does it all signify? However, hypersonic air travel at speeds of up to Mach 17 will do more than only make it possible to have trips between New York and Los Angeles that take less than thirty minutes. Additionally, it will make it possible for spaceplanes to effortlessly fly themselves all the way up into orbit without having to attach themselves to rocket boosters. There is also the possibility that this might have substantial repercussions for both the nation’s security as well as the global nuclear power structure.

As our very own David Szondy showed out in this fantastic hypersonic flight explainer that was published in 2017, there is currently no radar or missile defence system in the world that is capable of dealing with a hypersonic missile. To add insult to injury, you wouldn’t even need to attach a warhead to it in order for it to wreak levels of destruction comparable to those caused by a nuclear weapon. According to what Szondy has written, “all of that speed and all of that inertia turns any research platform, recon unit, or passenger aircraft into a potential kinetic weapon.” “They can demolish a target without using particularly powerful explosives. They need only to hit it in order to win. To put it another way, if the necessary modifications are made, any hypersonic vehicle can be converted into a weapon.”

In point of fact, the National Science Foundation, the NASA Florida Space Grant Consortium, and the Air Force Office of Scientific Research all contributed to the funding for this study. It should come as no surprise that the military is interested in these bottled explosion engines.