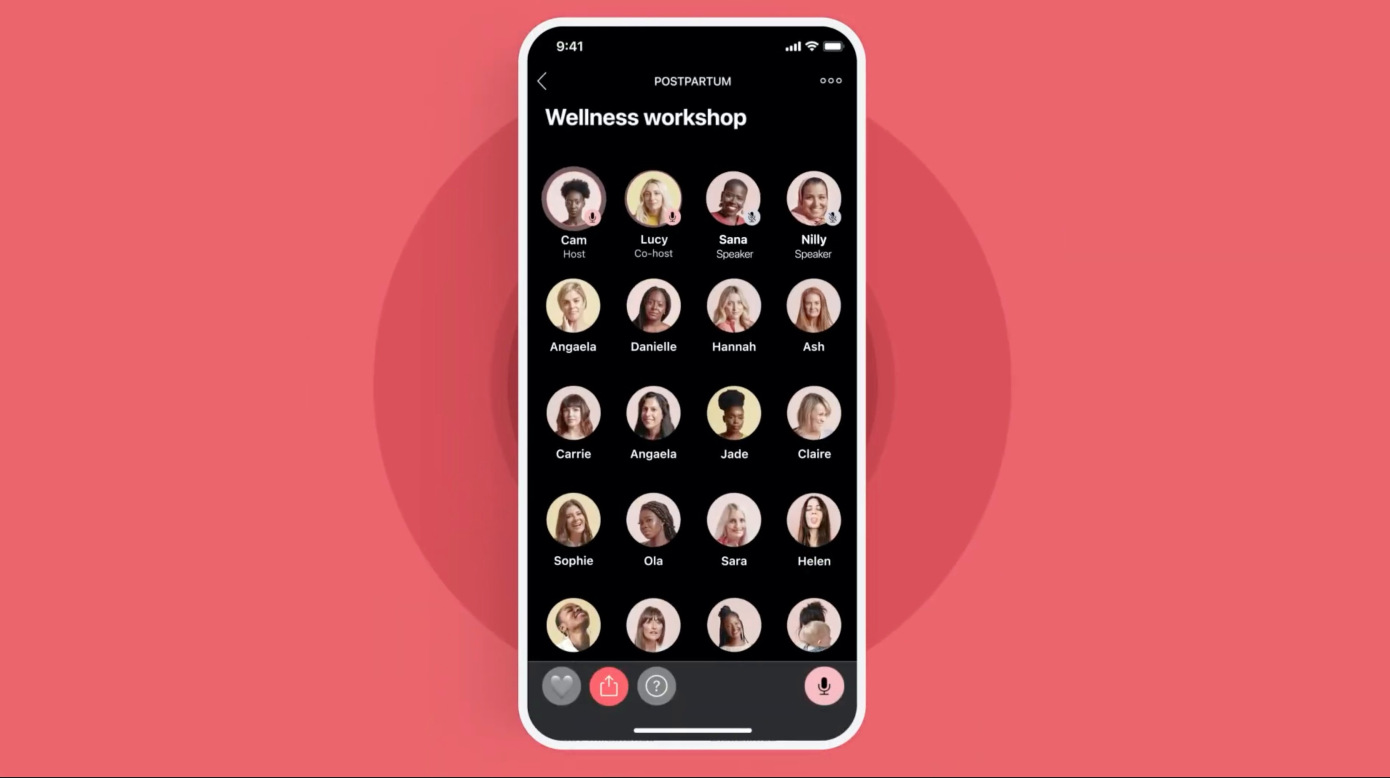 Mobile social networking app for women, Peanut, is today becoming the latest tech company to integrate audio into its product following the success of Clubhouse. Peanut, which began with a focus on motherhood, has expanded over the years to support women through all life stages, including pregnancy, marriage and even menopause. It sees its voice chat feature, which it’s calling “Pods,” as a way women on its app can make better connections in a more supportive, safer environment than other platforms may provide.

The pandemic, of course, likely drove some of the interest in audio-based social networking, as people who had been stuck at home found it helped to fill the gap that in-person networking and social events once did. However, voice chat social networking leader Clubhouse has since seen its model turned into what’s now just a feature for companies like Facebook, Twitter, Reddit, LinkedIn, Discord, and others to adopt.

Like many of the Clubhouse clones to date, Peanut’s Pods offer the basics, including a muted audience of listeners who virtually “raise their hand” to speak, emoji reactions, and hosts who can moderate the conversations and invite people to speak, among other things. The company, for now, is doing its own in-house moderation on the audio pods, to ensure the conversations don’t violate the company’s terms. In time, it plans to scale to include other moderators. (The company pays over two dozen moderators to help it manage the rest of its app, but this team has not yet been trained on audio, Peanut notes.)

Though there are similarities with Clubhouse in its design, what Peanut believes will differentiate its audio experience from the rest of the pack is where these conversations are taking place — on a network designed for women built with safety and trust in mind. It’s also a network where chasing clout is not the reason people participate.

Traditional social networks are often based on how many likes you have, how many followers you have, or if you’re verified with a blue check, explains Peanut founder CEO Michelle Kennedy.

“It’s kind of all based around status and popularity,” she says. “What we’ve only ever seen on Peanut is this ‘economy of care,’ where women are really supportive of one another. It’s really never been about, ‘I’ve got X number of followers.’ We don’t even have that concept. It’s always been about: ‘I need support; I have this question; I’m lonely or looking for a friend;’ or whatever it might be,” Kennedy adds.

In Peanut Pods, the company says it will continue to enforce the safety standards that make women feel comfortable social networking. This focus in particular could attract some of the women, and particularly women of color, who have been targeted with harassment on other voice-based networking platforms.

“The one thing I would say is we’re a community, and we have standards,” notes Kennedy. “When you have standards and you let everyone know what those standards are, it’s very clear. You’re allowed an opinion but what you’re not allowed to do are listed here…Here are the things we expect of you as a user and we’ll reward you if you do it and if you don’t, we’re going to ask you to leave,” she says.

Freedom of speech is not what Peanut’s about, she adds.

“We have standards and we ask you to adhere to them,” says Kennedy.

In time, Peanut envisions using the audio feature to help connect women with people who have specific expertise, like lactation consultants for new moms or fertility doctors, for example. But these will not be positioned as lectures where listeners are held hostage as a speaker drones on and on. In fact, Peanut’s design does away with the “stage” concept from Clubhouse to give everyone equal status — whether they’re speaking or not.

In the app, users will be able to find interesting chats based on what topics they’re already following — and, importantly, they can avoid being shown other topics by muting them.

The Pods feature is rolling out to Peanut’s app starting today, where it will reach the company’s now 2 million-plus users. It will be free to use, like all of Peanut, though the company plans to eventually launch a freemium model with some paid products further down the road.