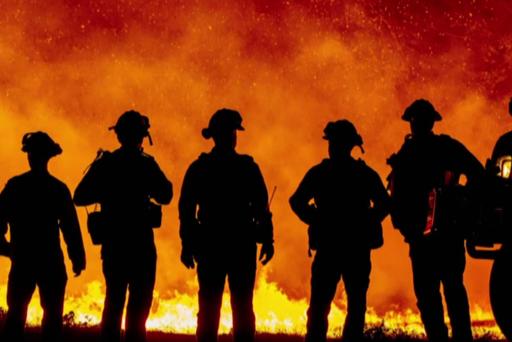 “It’ll start getting cooler, you just watch,” Trump said on Monday in California while being briefed on the ongoing wildfires by Gov. Gavin Newsom and other state leaders.

“I wish science agreed with you,” Wade Crowfoot, the state’s natural resources secretary, pushed back.

Newsom and Crowfoot pointed to earlier comments Trump made that forest management is largely to blame for the unprecedented wildfires disrupting lives across parts of California, Oregon, and Washington state. More than 5 million acres have been burned, hundreds of thousands have evacuated their homes and at least 26 people have died as of Monday.

“We have not done justice on our forest management. I don’t think anyone disputes that,” Newsom acknowledged, but he added, “climate change is real and that is exacerbating this.”

“We want to work with you to really recognize the changing climate and what it means to our forests,” Crowfoot told Trump. “That science is going to be key. If we ignore that science and sort of put our head in the sand and think it’s all about vegetation management, we’re not going to succeed together protecting Californians.”

“I don’t think science knows, actually,” Trump responded and quickly moved on to the next set of questions.

The scientific community agrees that changes in climate, such as higher temperatures, can lead to drier and warmer conditions that increase wildfire risk and extend its duration. California and other western states are experiencing record heat waves and years-long drought. Recent environmental research found that climate change is linked to the increasing fire risk in parts of California.

Other factors, including land use and forest management, also contribute to the fires.

The president has long dismissed the growing climate crisis and previously called the science a “hoax” perpetrated by the Chinese to hurt the US economy. As president, Trump has reversed or undermined every significant federal policy designed to reduce emissions that contribute to climate change.

Even after his daughter and top adviser Ivanka attempted to stop her father from abandoning the Paris Climate Accord, Trump withdrew from the landmark international agreement in 2017.

A New York Times report found the Trump administration had rolled back or gotten rid of at least 70 environmental regulations and 30 more such policy reversals were in progress as of mid-July.