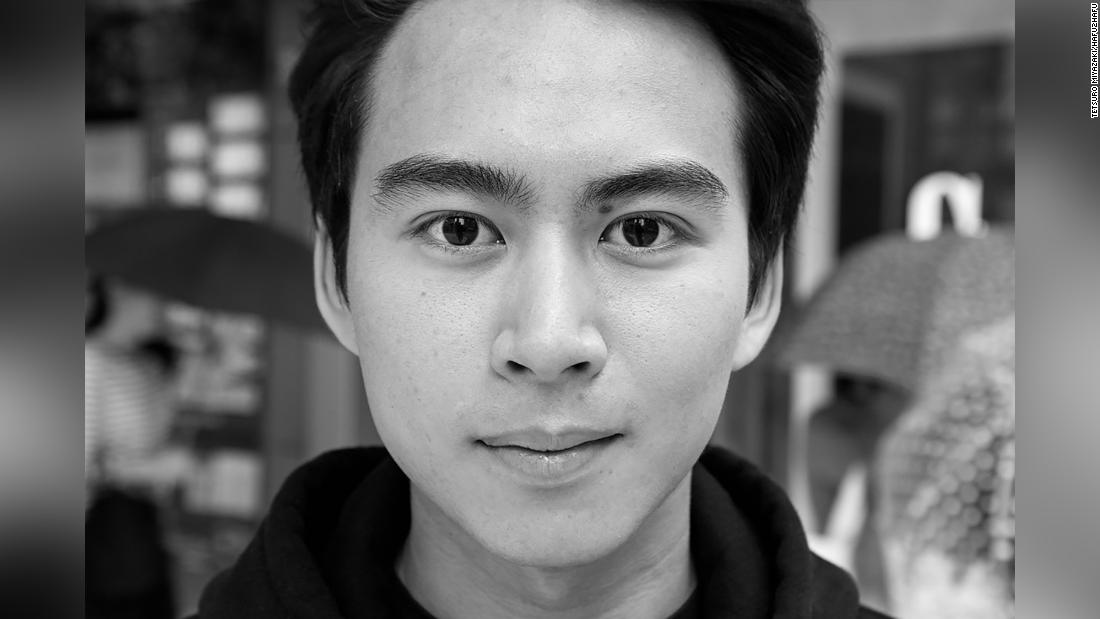 Anna, a woman of mixed Japanese and American heritage, was in a taxi en route to a party in Tokyo last year when she was asked that question, and says she had half expected it.

Anna, who requested anonymity for privacy reasons, has a Japanese mother and a White American father, and spent her childhood in Japan, before moving to the US in her teens.

“I don’t know how many hours I’ve spent telling my life story to strangers who want to fulfill their curiosity,” says Anna. “It was getting to a point where I thought, Why do I need to share my biological background with someone I’m never going to meet again?”

Official figures paint Japan as an ethnically homogenous nation — according to the 2018 census, 98% of the population is considered Japanese. People who look different, therefore, attract more attention than they would in a more ethnically diverse country such as the US.

In some cases, that’s not a bad thing.

Many mixed heritage entertainers and sports stars are hugely popular in Japan. Well-known figures such as Vogue model Rina Fukushi and tennis star Naomi Osaka have given mixed heritage people more prominence in the public sphere in Japan, and globally.

For others, however, the apparent fascination with their heritage brings unwanted attention and can invite casual racism. Some who consider themselves Japanese say it leaves them feeling othered in their own country.

Mixed-race identity has a complex history in Japan.

Between 1639 and 1853, Japan closed its borders to foreign influence — with the exception of Chinese and Dutch traders who came to the port cities of Yokohama and Nagasaki.

In those hubs, the derogatory term “ainoko” — or “hybrid” in English — was used to describe children born of a Japanese and foreign parent, according to Hyoue Okamura, a Japan-based independent scholar.
As Japan opened up and modernized during the Meiji era (1868 to 1912), it started cultivating its own brand of nationalism, promoting the country’s racial homogeneity and superiority over other Asian nations. With the concept of Japanese supremacy came new terms to describe people of mixed race.
In the 1930s, the term “konketsuji” — or “mixed-blood child” — described the children of Japanese nationals who married locals in countries like China, Taiwan and Korea that Japan colonized. Those children faced discrimination as the government considered people from Japan’s colonies as inferior to the Japanese.
Following Japan’s defeat in WWII and during the American occupation (1945 to 1952), the term konketsuji applied to the children of American military personnel and Japanese women, and was considered a derogatory term. Politicians associated those children with Japan’s defeat and painted them as a problem for society.

“Back then, there was a lot of debate over whether to assimilate or keep apart these children when they entered elementary school,” says Lawrence Yoshitaka Shimoji, a sociologist at Ritsumeikan University in Japan.

European languages were seen as chic and exotic and Japan’s fascination with Western movie stars grew.

By then, the derogatory term of konketsuji had given way to “hafu,” a corruption of the word “half-caste”. In 1973, its use was formalized in the 1973 edition of a dictionary called Kanazawa Shōzaburō’s Kōjirin or “Wide Forest of Words,” where it was listed as a synonym of konketsuji.

However, “hafu” didn’t come with the same negative connotations as konketsuji. It was even used as a selling point to promote the girlband “Golden Hafu.” The mixed-heritage quintet performed covers of Western pop songs such as 1962 US pop song “The Loco-motion,” more famously covered by Kylie Minogue, and “Come, come to Hawaii!!! in Japanese.
The makeup and fashion industries picked up the trend, coining the term “hafu-gao” or “half-face” to represent an aspirational look that appeared half foreign. That look valued Japanese people with longer legs and defined facial features, including bigger eyes and taller noses, that gave them the impression of being non-Japanese, says Okamura.

Rather than unite the population, the buzz around “hafu” created an “us and them” mentality, says Okamura. Mixed heritage people who look more foreign than Japanese may be treated as foreigners, he added, even if they are Japanese nationals.

The fascination with mixed heritage Japanese people can also be traced to the country’s lack of immigration.

Last year, the country registered a record 2.93 million people as residents, according to Japan’s Immigration Services Agency. That’s still only around 2.3% of a population of 126 million — much smaller than the 9% of foreign citizens residing in the United Kingdom and the 13.7% of US citizens who were born elsewhere.
In 2018, Japanese lawmakers approved a policy change proposed by Prime Minister Shinzo Abe to create new visa categories to allow an estimated 340,000 foreign workers to take both high-skilled and low-wage jobs in Japan over five years.

It represented a major shift in Japan’s approach to immigration.

However, the change didn’t go far enough, according to Jeff Kingston, a Japan expert from Temple University. He said the roles would be filled by migrant laborers who would be expected to leave Japan one day.

Despite the barriers, Japan’s demographics are slowly changing. In 2019, one in 30 babies born in Japan had a non-Japanese parent compared to 1 out of 50 babies three decades ago, according to the Ministry of Health, Labor and Welfare.

While ethnic Ryukyuans, Japanese-Koreans, Japanese-Chinese and Japanese-Brazilians, among other mixed heritage people, are part of society often that diversity isn’t reflected in the population figures.

Countries like America and Britain ask people to identify their ethnicity in surveys, but in Japan race, ethnicity, language, culture, class, and citizenship are conflated often leaving only options to identify either as “Japanese” or a “foreigner,” according to a 2013 report published in Sociology Compass.
In 2019, the Japanese government changed the law to consider the Indigenous Ainu people as a minority. But there is no box to tick on census forms for people of mixed heritage, says Shimoji, from Ritsumeikan University. Japanese census forms do not, he says, ask respondents for their ethnic and racial backgrounds nor for the nationalities of their parents not registered in a family unit.

Japan’s constitution stipulates that all citizens are equal under the law and granted fundamental human rights. At schools, teachers educate children on these topics, but the ideas have not properly taken root in the country, says Okamura, the independent scholar.

For instance, sometimes Japanese-Chinese or Japanese-Koreans, who are referred to as “invisible hafu” can face discrimination when they own up to their non-Japanese ethnic background, says Shimoji.

And others who have darker skin can receive unwanted attention.

David Yano, a half-Japanese and half-Ghanaian man, has lived in Japan for over 20 years. He has appeared on television shows to talk about his experiences growing up in the country.

It hasn’t always been easy. Yano says he was bullied for looking different at school. When he started appearing as a cultural commentator on TV, his agents recommended he play into the stereotypes of Black people as being funny and try to make it as a comedian.

Yano says he’s been stopped by police in Tokyo’s Shinjuku ward and has faced discrimination when trying to rent a home. He says estate agents have told him that landlords have rejected his tenancy applications based on his skin color. “They don’t take time to find out about my background. Instead, they worry about what other tenants will think,” says Yano.

There are no surveys examining the number of mixed heritage Japanese citizens who have been refused housing. But there is one relating to foreigners. In 2017, a government survey of 2,044 people found 39% had been denied housing because they were foreign.

“Japanese (mixed heritage) people are experiencing racism, but as they are Japanese, they aren’t included in surveys that would highlight that issue,” says Shimoji, the sociologist.

Yano is now the founder of Enijie, a nonprofit that promotes education and ties between Ghana and Japan. He thinks Japan is slowly changing as more people become open to questioning their biases and assumptions about what it means to be Japanese.

He’s one of a number of people who are trying to expand mindsets in Japan.

Subjects of discussion include tackling stereotypes of hafu where they are presumed to be everything from bilingual to “disappointing,” if they are unattractive, not bilingual and from a non-White parent.

Last year, Anna made small “meeting cards” to give to nosy Japanese strangers. That card includes information on everything from which one of her parents is Japanese and American to whether her eyelashes are real or fake. It also states that it’s rude to ask someone you’ve just met personal questions about their race and appearance.

So far, Anna has handed out around 15 cards. A man in his sixties assumed Anna was a foreigner and commented on her decision to buy a typical Japanese dish topped with grated yams at a convenience store. He angrily threw the card back at her when she gave it to him. Another woman said she thought Anna would take her comments on her looks as a compliment. She asked if she could keep the card to show her husband.

This June, Anna tweeted a photo of that card as many Japanese social media users voiced their support for the Black Lives Matter movement. It quickly gained traction with over 124,000 likes and 33,400 retweets.
One Twitter user said he wasn’t of mixed heritage but that the card was useful for people today. “I’d like to tell those complaining about this card to take a class in cultural anthropology. Lol,” he added.
Others were less convinced, tweeting that whoever received the card would feel uncomfortable.

Sometimes Anna is referred to not as “hafu” but as “daburu.” That term — meaning “double” — was coined in the 1990s after the mother of a mixed heritage child wrote to a Japanese newspaper to promote the positive connotations of a word implying two roots.

“Around my group of friends daburu is not that popular. We’re not upset we’re hafu; we’re upset that people think we’re different,” says Anna. “I prefer the term “mikusu” (mixed) because it involves more people, but I’d just prefer not to be called anything.”

Labels aside, she says Japan isn’t keeping up-to-date with the debates on racial equality happening elsewhere.

For instance, in 2018, Naomi Osaka’s victory in the 2018 US Open tennis tournament triggered an intense discussion on what it means to be Japanese on social media, with users praising Osaka for her Japanese win. Osaka’s heritage spans Japan, Haiti and the US.

Some were quick to point out the double standards.

“I’m sorry, but people who say Naomi Osaka is Japanese or call her Japan’s pride make me sick. You can’t just embrace ‘hafu’ (biracial people) as Japanese when it suits you. You usually discriminate against us,” tweeted @phie_hardison.
Two years on, the gaffes around race and identity re-emerged when Japan’s public broadcaster NHK took down a controversial Black Lives Matter anime after social media users lambasted it for being out-of-touch and racist. The clip — which perpetuated stereotypes and made no mention of George Floyd — prompted a swift apology from NHK and a promise to retrain staff.

After Anna’s meeting card went viral on Twitter, she received messages from mixed heritage Japanese children who asked her for advice on how to deal with bullies at school. She felt like the conversation hadn’t moved on since she was in third grade and being bullied for looking different.

To shift mindsets, Anna wants influential hafu people in the public eye to talk about the negative discrimination they experienced before fame. Politicians, popular CEOs and entertainers who endorse multiculturalism need to tell people that casual racism is hurtful and offensive, she says.

As for her meeting card, Anna thinks the attention it sparked is positive.

“The fact that people talked about this card is a small but big change. In that sense, I feel there has been change and there is room for change in the next coming years,” says Anna. “But unless something dramatic happens, it won’t be enough.”

How to Open Rar Files and unZip them in Mobile, Windows 10 or Mac?

What is a Web Crawling Tool?